IF YOU'RE LOOKING FOR TICKETS TO OUR LAUNCH EVENT, THEY ARE AVAILABLE NOW ON SITE (for the 2/8/20 event).

Iron Man and Black Panther team up to stop Rhino from rampaging through the streets of New York. Captain Marvel and Spider-Man battle Ultron as he threatens global annihilation. Do you have what it takes to join the ranks of these legendary heroes and become a champion?

Jump into the Marvel Universe with Marvel Champions: The Card Game, a cooperative Living Card Game for one to four players!

Marvel Champions: The Card GameÌ_•À_Ì_å¢Ì_•À__invites players embody iconic heroes from the Marvel Universe as they battle to stop infamous villains from enacting their devious schemes.

As a Living Card Game,Ì_•À_Ì_å¢Ì_•À__Marvel ChampionsÌ_•À_Ì_å¢Ì_•À__s supported with regular releases of new product, including new heroes and scenarios. Check out the products section at the bottom of this page to see everything announced so far!

"The best thing we ever did was getting together in the first place.Ì_ÌöÌ_Ì_́Ì_•À_Ì_åÀ_ I was so new to the armor, to the adventure, and when this team got together... I said to myself 'this is worth doing, this is important.'"
Iron Man,Ì_•À_Ì_å¢Ì_•À__Avengers vol.3 #504

Once all players have selected their hero, they choose a scenario taking on a nefarious Marvel villain and their matching scheme. Although each villain brings their own allies and tactics to the scenario, these scenarios can also be customized with additional modular encounters to increase the challenge of a fight or mix up the forces arrayed against you.

Each villain and scheme has multiple forms, shifting the momentum and the rules of the fight as the villain continues to enact their plans and the heroes attempt to defeat them. Let the scheme advance enough times and the heroes will lose the game. But if you can fight through the villain's various forms and completely deplete their hit points, your team of heroes emerge as champions!

Although you're a hero at heart, you won't spend the whole game in your hero form.Ì_•À_Ì_å¢Ì_•À__Marvel Champions: The Card GameÌ_•À_Ì_å¢Ì_•À__places just as much emphasis on your character's alter-ego as it does on their heroic identity. Many cards in your deck aren't based on your hero's powers, but on their life outside their costume. As the leader of a nation, T'Challa has unique advantages, compared to the more stealth-and-tech oriented Black Panther. For example, only T'Challa can call on hisÌ_•À_Ì_å¢Ì_•À__Ancestral KnowledgeÌ_•À_Ì_å¢Ì_•À__Core Set, 42) to find the proper course of action. But having a life outside the mask also entails a certain sense of danger. Each of these alter-egos has their own obligations and responsibilities that your adversaries can use at the worst possible moment!

With the exception of flipping your identity card, you can use these options as many times as you want during your turn, provided you can pay the cost that many of them demand.

Although you're giving up cards and options to payhis also means you'll always have the oppurtunity to perform amazing feats on your turn. You refill your hand at the end of every player phase, meaning you'll always have the resources you need to make an impact in the fight, and you never have to "sit out" for a turn, creating fast-paced action with a mix of strategic decisions.Ì_•À_Ì_å¢Ì_•À__Marvel ChampionsÌ_•À_Ì_å¢Ì_•À__s always about reading the field, working with your teammates, and prioritizing the best course of action.

But your hero is far from helpless, even without the support of additional cards. On your turn, you can directly battle the villain using your attack (ATK) value, taking the fight to the villain mano a mano, or remove threat from a scheme by using your thwart (THW) value to outsmart the villain with tactics and ingenuity. If your character is in their alter-ego form, you can use their basic recovery (REC) value to recover hit points while your allies attack and thwart the villain! 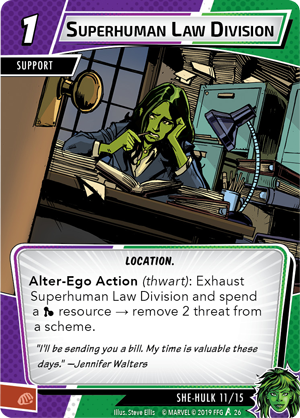 In addition to all of the different actions that you can take on your turn, each hero's deck can be constructed in very different ways to unlock distinct possibilities and new strategies. Each hero has their own unique set of fifteen cards that truly define their hero. These are then mixed with cards from one of four aspects (Leadership, Protection, Aggression, or Justice) to construct a 40-50 card deck. Add in basic cards that any hero can use andÌ_•À_Ì_å¢Ì_•À__Marvel ChampionsÌ_•À_Ì_å¢Ì_•À__provides a solid base for your deck while still providing plenty of customization options if you enjoy deckbuilding.

After each of the players have taken a turn, they'll draw cards up to their hand size, ready their characters, and prepare for an assault from the villain. The villain begins their turn by placing more threat on their scheme. This threat represents a ticking clock, bringing the villain closer to completing their objective and ultimate victory. Whether you_Ì_Ì__å´ÌÜ_Ì_å£å´ÌÜ_Ì_•À__Ì_Ì_ÌÐ_re facing the monstrous Rhino or the terrifying Ultron, this means bad news for our heroes.

If seven threat per player is placed on The Break-In!, the heroes lose the game!

After threat is placed on the scheme, the villain activates against every hero still standing. If your character is in their hero form, they'll suffer a brutal attack, but staying back from the fight in your alter-ego allows the villain to place even more threat on their scheme! Each of these activations is bolstered by cards from the villain's encounter deck, so you can never be quite sure exactly how much damage your hero is about to take, or how much threat is about to be placed on the scheme. Fortunately, your hero can exhaust themselves to prevent damage equal to their defense (DEF) value.

The different ways that the villain can act forces the heroes to think ahead during their turns. If every hero is in their alter-ego form, there's no one around to stop the villain from scheming and bringing his dark plans to fruition. But if everyone is taking a direct hit from the villain, that may put the heroes in an even worse situation. You'll have to work together and prioritize your objectives every turn if you have a hope of finding victory!

Finally, each hero draws a card from the villains encounter deck. This deck represents the villain's powers, tools, and minions, and also includes your hero's unique obligation, shuffled in at the start of the game. During this stage, Rhino might find a new ally in the form of the Shocker, Klaw might deliver a mighty Sonic Boom, or Ultron could call in his drone army.

These cards make your job harder, but the Marvel heroes are experts in overcoming adversity! If you can withstand the villain's schemes and attacks, the heroes enter another player phase, ready to jump back into the action. Do you have what it takes to defeat the villain and save the world?